Well, I got a promotion at work. Or, at least, a promotion-in-progress. I'm now managing the web collaboration server software team at Apple. Neat.

Of course, it strikes me that, as I climb the corporate ladder, it becomes more and more important that I not blog/compose/DJ with the name "appleJohn," because I'm not representing Apple when I do these things. This nickname has stuck so hard that it'll be hard to shake it off.

So I'm on a mission to find a new DJ name. It has a few requirements:

What are your thoughts?

(I already reserved djaaronanderson.com -- Aaron is my middle name -- so that's a decent backup, although it would confuse the hell out of my friends.)

Update: we have a winner! DJ stuDLycaPs it is.

From this article (among many I've seen in the past few days, although The Economist should be a pretty reputable news source):

SIX days ahead of the North Carolina primary comes a story of real sleaze—not Jeremiah Wright-style buffoonery, but Nixon-style illegality designed to dupe and disenfranchise voters—that should surprise precisely nobody who has been following and covering this campaign. A group called Women's Voices Women's Vote (WVWV), which claims to have been "created to activate unmarried Americans in their government and in our democracy" has been placing robocalls to voters across North Carolina that seem designed to fool them into thinking they have not yet registered to vote. Many of the voters who received those calls are black. Voters in 11 states have complained about similarly deceptive calls and mailings that have been traced back to WVWV this primary season.

Guess which Democratic candidate WVWV's founder and president, Page Gardner, has donated $6,700 to (hint: it's not Barack Obama). Guess whose election campaign Joe Goode, WVWV's executive director, worked for (hint: it was in 1992, and it was a winning campaign). Guess whose chief of staff sits on WVWV's board of directors (hint: it was the president who served between two Bushes). And guess whose campaign manager was a member of WVWV's leadership team (hint: it's Hillary Clinton).

It's an odd story: a recording of someone named Lamont Williams calls voters to tell them a voter-registration packet is on its way. It's unclear whether anything arrives; what isn't unclear is that the call is well after the registration deadline. It's not too hard to imagine this call coming to an unsophisticated voter (and let me make this clear: I am in no way saying black voters, who seem to have received the lion's share of the calls, are all unsophisticated; I'm simply positing a scenario), and that voter becoming confused. Perhaps he thinks he's not registered, and calls his state's board of elections who tells him it's too late so he stays home on election day. Perhaps the board of elections doesn't know what he's talking about, and he gets frustrated and stays home, assuming he's unregistered.

In 2004, Rob and I went to Nevada and canvassed Democratic houses, clearing up a mis-informative mailing stating that voters' polling place had changed. Others there had to deal with organizations which would run "non-partisan" voter registration drives and then throw away Democratic registrations.

In this case, this voter fraud has closer and more documented ties to the candidate. It's difficult to say whether Hillary had anything to do with this directly (although I would suspect she probably didn't), but does this "get her elected at all costs," combined with the jingoism, patronizing, and fear tactics she's used, really make her more "electable?" If there's any campaign that has the balls to attempt to beat the Republicans at their own game, it's Hillary's. But, with a sitting Republican president with the highest disapproval rate ever and a weak candidate like McCain on the other ticket, do we need to play these games? And if we're playing them between two Democrats, are we disenfranchising the very voters we're going to need in November?

I know, I haven't posted much lately. I'll report more news in the next couple of weeks -- it's been pretty hectic the past few weeks.

I've been collecting some great music, so I thought I'd put together April's mix with some new stuff and some old. It's a bit more diva-laden than normal, but who cares. It's uplifting and fun.

You can either listen on the Web, or subscribe to the podcast in iTunes.

I realized that I hadn't posted a link to my podcast here, and I thought I'd do so:

This has my latest (admittedly trancey) March mix, as well as my live set from Bliss (which is... by my humble opinion... AWESOME.)

I don't usually watch Ellen's show, but I admire her for her speech here about the shooting of Lawrence King.

My mom loves dance music. Especially trance. She downloaded my podcast and danced to it with her husband and her dog.

Somewhat weird but, in the end, very very cool. Maybe eventually she can show up for one of my gigs. 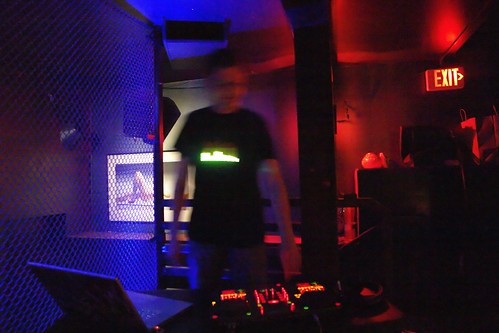 Doing the set at Bliss on Thursday was awesome. Thanks to everybody that showed up!

Ironically, I'm what credit cards call a "deadbeat," because I pay my balance off in full every month and never pay interest.
Collapse